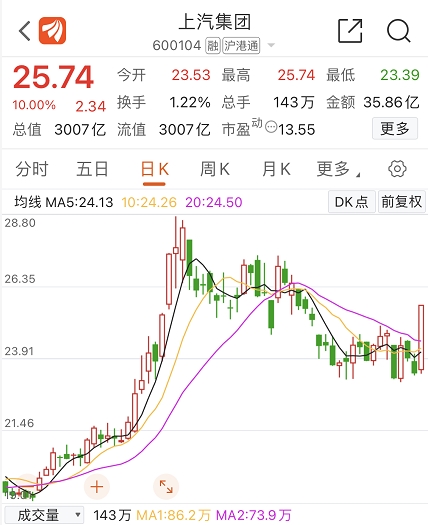 It is worth noting that the other 10% equity of Zhiji Auto will be divided into 5.1% core employee shareholding platform ESOP and 4.9% user equity platform CSOP. In addition,BrokerageChinese reporters learned that Zhiji Automobile’s R&D, management, and marketing must develop independently, and get rid ofenterpriseThe bondage, more emphasisStart a businessMentality.

In the capital market, the valuations of traditional auto companies have been completely crushed by new automakers, while companies such as SAIC and Great Wall seem to be fighting back. Some institutions have pointed out that the high market value of listed new car companies may bring a butterfly change in the valuation of the industry. Can the current efforts of various traditional car companies add another impetus to the revival of valuation?

On December 28, SAIC Motor drove high and quickly closed the board successfully in the afternoon, with a price of 25.74 yuan per share.priceAt the close, turnover was 3.586 billion yuan and the market value reached 300.7 billion.

According to market interpretation, Zhiji Auto, jointly established with Ali, has become a catalyst for SAIC stock price changes.

Brokerage China reporter learned that, although born out of SAIC, Zhiji Auto has a high degree of independence at all levels of business.

“The internal attitude is multi-use ethics, that is, the good resources of SAIC and Ali should be used more, but R&D, management, marketing, etc. must be developed independently, free from the shackles of large companies, and more emphasis on entrepreneurial mentality.” The person introduced to the Chinese reporter of the brokerage company.

It is worth noting that the other 10% equity of Zhiji Auto will be divided into 5.1% core employee shareholding platform ESOP and 4.9% user equity platform CSOP. In addition, the brokerage China reporter learned that the research and development, management, and marketing of Zhiji Auto must be developed independently, free from the shackles of large enterprises, and emphasize the entrepreneurial mentality.

When Zhiji Auto explained the logic of user equity, it said that the data generated by the user during the use of the car is directly promoted through the automatic deep learning of AI.product, Service andBrandThe core of “software-defined car” is not software itself, but data-driven.

Therefore, Zhiji Auto has added CSOP, a breakthrough digital rights platform for users.On the CSOP platform, users will continue to drivemovable propertyProduct and brand optimization and iteration, Zhiji Auto will also apply includingBlockchainA series of cutting-edge technologies including digital rights confirm the value of data contributed by users. In the future, smart car owners will not only have in-depth intelligent products and service experience, but will also become a data symbiosis partner of smart cars, sharing the value of corporate growth.

Zhiji Automobile also announced a large number of black technologies.In terms of batteries, Zhiji Auto andNingde eraThe most cutting-edge power battery technology is being developed: doped with silicon to supplement lithium batteries, share group technology patents, and will be the first to apply this battery technology on a global scale. The battery has the highest energy density in the world, exceeding the current industry-leading level by 30%-40%. The new architecture bandwidth can support up to nearly 1,000km of endurance, and achieve an ultra-long 200,000 km zero attenuation.

Interestingly, the concept of wireless charging has also been applied to cars. According to Zhiji Automobile, its products are equipped with 11KW high-power wireless charging for the first time in mass production, and its charging efficiency is almost the same as traditional charging. Combined with the fully automatic autonomous parking function, the vehicle can automatically park in the parking space to supplement energy.

VariousshareholderHigh hopes are also placed on Zhiji Automobile, especially SAIC. The aforementioned insiders said that Zhiji Automobile will become the core pioneer of SAIC Group’s transformation and overtaking in the new era.

Zhiji Auto is currently located in the Zhangjiang High-tech Intelligent Core Park. In the future, it will be the first scientific and technological innovation enterprise to enter the “gate of science” in Zhangjiang, Shanghai, enjoying geographical advantages, policies, land, and talents.

Under the general trend of new energy vehicles, new forces in car manufacturing are the “good heart” of the current capital market.

Wanlian Securities predicts that next year’s new energy vehicles are expected to grow substantially in the public and private sectors.

From the perspective of the sales structure of new energy vehicles, consumption in the private sector has increased significantly. In the field of pure electric passenger vehicles, the proportion of private consumption has stabilized as high as 80%, an increase of 15% compared with last year, indicating that the recognition of new energy vehicles by private consumers has increased significantly.

From the perspective of model level, there is a trend of polarization. Small cars have gradually stabilized from the previous sharp decline, and the proportion of large cars has increased significantly: From January to November 2020, the sales of A00 class accounted for 27%, compared with last year. Relatively stable, and the B grade is as high as 22%, an increase of 19% compared to last year’s 3%.The main reason lies in the high-end and low-end marketsupplyThe breakthrough led to, on the one hand, in the low-end market, automakers streamlined thepersonalityTo optimize demand, reduce costs, and attract consumers with affordable transportation models, such as Wuling Hongguang mini and Euler Black Cat, which sold 33,094 and 9,463 vehicles in November, leading the way; on the other hand, in the mid-to-high-end market, the supply of models is obvious Optimized to be higher than fuel vehicle configuration functions,luxuryThe comfortable driving experience of the interior seat boat attracts consumers, such asTeslaModel 3、BYDHan and new car forcesWei LaiThe monthly sales of ES series, Ideal ONE, Xiaopeng P7, etc. have gradually increased.

Looking forward to next year, new energy passenger vehicles in the public and private sectors are expected to grow substantially. Due to the epidemic, the demand for rental operations in the public sector is limited. Under the stimulus of the demand for new energy rental and online taxi customization in first- and second-tier cities, demand will Significant improvement; Under the background of continuous efforts in the private sector and increasing supply of new energy vehicles by independent, joint ventures, and new car forces, sales are expected to increase significantly. It is expected that the sales of new energy vehicles in 2021 are expected to reach 1.87 million.Year-on-yearIncreased by more than 40%.

In the capital market, the valuations of traditional auto companies have been completely crushed by new automakers.

PerformanceIn contrast, the strong contrast in valuation can be felt. Tesla’s sales have increased significantly since 2018, and the full-year sales of 2020 are expected to achieve 500,000 vehicles. New domestic car manufacturers have begun to increase their volume this year, and sales have entered a period of rapid growth. According to the data of the China Automobile Association, the cumulative sales of Weilai Automobile in the first three quarters were 30,130, and Xiaopeng and Ideal were 18,160 and 14,077 respectively.

In terms of traditional car companies, SAIC Motor’s monthly production and sales report for November shows that SAIC Motor sold 643,928 vehicles in a single month in November, with a total of 4,853,875 vehicles sold in the previous November.

“In terms of market value, BYD and Weilai are basically the same, while SAIC’s market value is much lower than the former. However, in terms of new energy vehicles and vehicle sales, BYD and SAIC’s passenger car sales are far ahead of Wei. Come. When Moore’s Law andbusinessAfter model innovation has brought new profit models and development paths to traditional car companies, the valuation of traditional car companies is expected to increase. “Huajin SecuritiesAnalystLin Fan said.

Solemnly declare: The purpose of this information released by Oriental Fortune.com is to spread more information and has nothing to do with this stand.